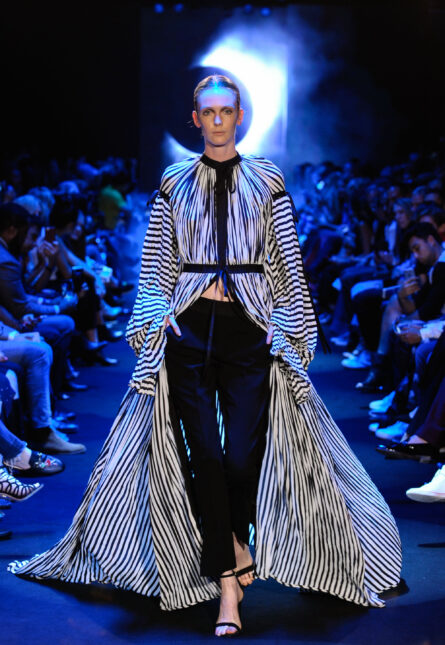 UNTTLD designers José Manuel St-Jacques and Simon Bélanger are known for their modern, avant-garde take on power dressing and the Montreal-based duo didn’t hold back on the drama on Day 2 of Toronto Fashion Week Reimagined.

“Pirate fleets taking on the Spanish Armada,” St-Jacques declared when asked about the inspiration for their spring 2018 collection. The designers recently became fascinated by Isabella I (the Spanish queen who sponsored Christopher Columbus’s expedition west) after watching a documentary about her on YouTube. “And then we heard about The Gentleman Pirate,” says Bélanger. Otherwise known as Stede Bonnet, he was a wealthy landowner in the early 1700s. He had a wife and family in Barbados, but decided to give it all up for a life on the high seas. “This idea of playing pirate was fun to us, plus we love drama, we love spectacle—it’s what we do,” says Bélanger.

Bringing pirate garb into the 21st century isn’t an easy task, but St-Jacques and Belanger are pros when it comes to making the wild and wonderful actually wearable—think body con dresses in statement stripes, fitted blazers with ruffle detailing and power suits made of delicate lace. “We always take extreme ideas and trickle it down to something you can wear forever,” says Bélanger. “Our designs are always about power and how to empower women with clothes,” adds St-Jacques. “Yes we like drama, but we don’t want the clothes to overpower the wearer. It’s not about us, it’s about her.”