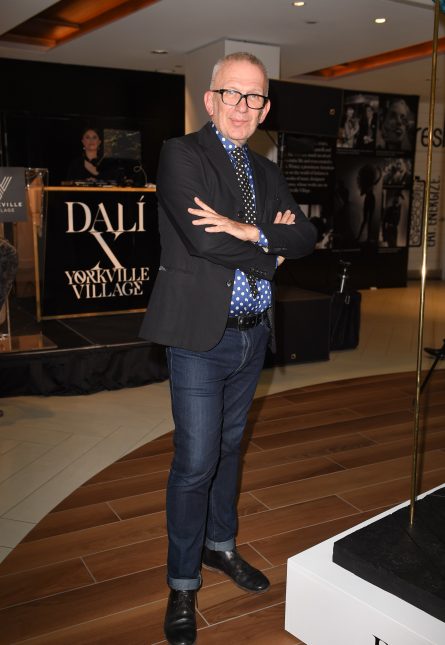 The excitement was high on Day 2 of Toronto’s Reimagined Fashion Week, as models, designers and the city’s fashion set convened at our chic new venue on Yorkville Avenue.

The first show to hit the crowded tent catwalk in the crystal clear tent was label Narces, who specializes in the types of gowns and that belong on red carpets—so it’s no surprise that this season’s collection was inspired by silver screen star Marlene Dietrich.

Toronto-based menswear label Bustle was the second show of the day, and the audience was charmed when designer Shawn Hewson and Ruth Promislow’s children walked down the runway alongside some of the city’s most stylish kids and a special appearance by Canadian modelling icon Stacey McKenzie.

The final show on the schedule was Montreal-based label UNTTLD, whose latest avant-garde collection was inspired pirate fleets taking on the Spanish armada. They’re already getting buzz internationally, and landed a very notable front row guest—Mr. Jean-Paul Gaultier himself.

The day’s festivities continued into the evening with the opening night party for Dalí x Yorkville Village, an art exhibit and installation presented by Yorkville Village around surrealist master Salvador Dali’s transcendent influence on the world of fashion. The opening night marked the first viewing of the exhibits in North America. In partnership with The Dalí Universe and Hazelton Fine Art Galleries, this colourful exhibition will be open to the public inside Yorkville Village from September 7th – 30th.

Guests including celebrated designer Jean Paul Gaultier perused the pieces including a selection of unique art works, six designer dresses inspired by the surrealist icon, including Franco Moschino’s whimsical t-shirt dress that salutes Dalí’s iconic moustache, the exhibit highlights this avant-garde artist of the 20th century and his influence on the world of fashion. With approximately 30 pieces to discover, the collection includes sculptures such as Woman Aflame, Homage to Fashion and Dalinian Dancer, bringing surrealism on a global scale to Yorkville Village. Additionally, a gallery of lithographs and paintings will be featured in this once in a lifetime opportunity.