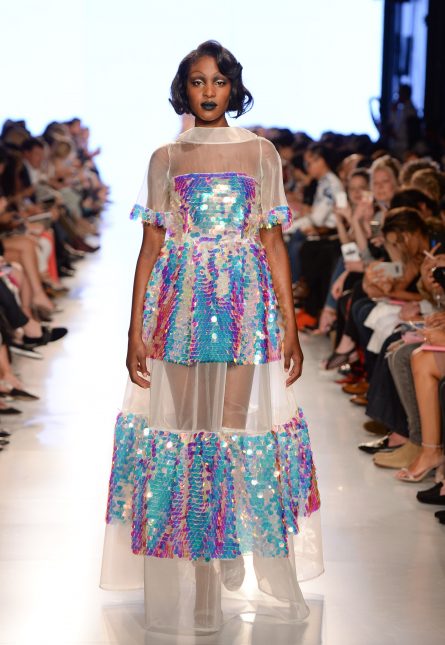 Fashion runs in the family for Narces designer and creative director Nikki Wirthensohn. The Austrian-born, Toronto-based talent, who showed her latest collection on Day Two of Toronto Fashion Week Reimagined, first learned about garment design from her mother. “She was the right-hand dressmaker for Victor Edelstein, who worked for the royal family in the early ’90s,” says Wirthensohn backstage. “She even made the famous dress that Princess Diana wore to dance with John Travolta. My whole fashion education came from my mother.”

Known for her elegant after five attire, Wirthensohn lit up the runway with a mix of eveningwear and playful cocktail pieces, including a sequined romper and a little black dress featuring feathers and lace. The collection was inspired by famed screen legend Marlene Dietrich. “I find her so interesting, she has such a strong fashion sense,” says Wirthensohn. “She embodies the Narces woman—someone who loves to have fun and who doesn’t put rules on themselves.”

Nowhere is this Narces ethos more apparent than in the label’s bridal looks—and this season, the designer presented bridal mini skirts and dresses with sheer panels. “Don’t ever say ‘I can’t wear this.’ You can wear everything,” says Wirthensohn. “Have fun, be glamorous.”