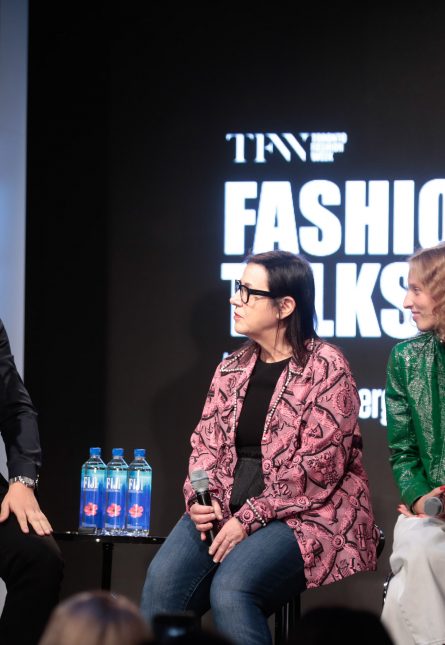 We kicked off Day Two of Toronto Fashion Week Reimagined with our exclusive panel discussion: Fashion Talk Hosted by Derek Blasberg Featuring Petra Collins and Arianne Phillips. Inside the packed tent in Yorkville, the three industry powerhouses (Blasberg is Vanity Fair’s “Man on the Street” and host of “CNN Style” on CNN International, Collins is an influential artist/photographer/filmmaker and Phillips is a renowned Oscar-nominated costume designer) held an engaging 45-minute conversation on topics ranging from working with pop icons to dream projects. “I get to hang out with two of my favourite people,” said Blasberg when he introduced our two guest panelists, who then engaged the audience with their unique industry perspectives.

ON THE INTERSECTION OF FASHION AND CULTURE

Arianne Phillips: “Fashion is a reflection of our culture at any given time; it’s about what’s relevant now. You can look at a fashion editorial from 1960 or 2017 and hopefully have an idea of what’s going on in our culture.”

ON THE ART OF COLLABORATION

Arianne Phillips: “There’s a real synergy with Madonna and Steven Klein and I dare say myself. The way the three of us collaborate together, we all have a similar sensibility.”

Petra Collins: “I would love to direct a horror film, that’s what I’m doing next. Like Carrie and The Exorcist, and maybe a bit of Black Hole mixed together.”

Arianne Phillips: “I did my first Broadway show [Hedwig and the Angry Inch] a few years ago, and I’m doing my first opera right now—it’s a co-production between the Metropolitan Opera in New York and the English National Opera in London, which opens in November.”