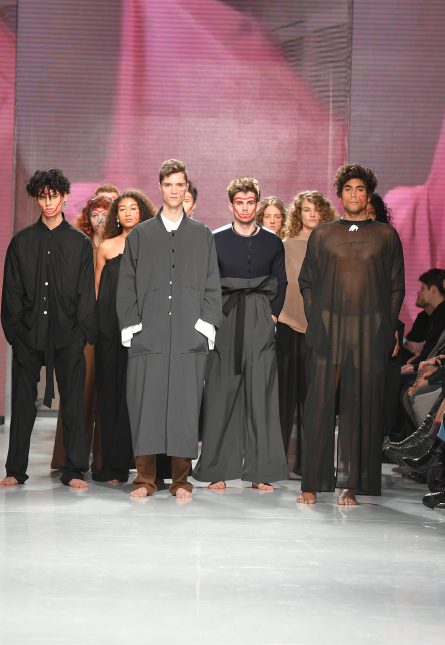 Pedram Karimi’s Fall/Winter 2018 show opened with a handwritten note projected onto the giant screens at the top of the runway:

“Imagine nostalgia in the future, somewhere familiar yet not fully so. I’m inspired and saddened by the over-consuming society and day and age we live in.

“Imagining our children, the future adults and responsibilities picking up the pieces of our now, takes me back when I was a little boy and all I wanted to do was to play.

“This visual and emotional flashback inspired me to present an innocent and playful take on clothes and fashion to remind our adults selves to play more and consume less.”

The letter set the tone for the collection: anti-consumerism.

“I daydream a lot, usually about making this world a better world and how we can do this as a collective,” says the Montreal-based designer. “We buy so much stuff… I just wanted to shed some light on it and hopefully make people more mindful about their shopping.”

But criticizing overconsumption is an interesting approach, especially for someone in the fashion industry. But to Karimi, mass consumption of his clothing is not what’s important, it’s more quality over quantity.

The collection itself, which was presented by RE\SET Fashion, didn’t have very many pieces — just six to eight core silhouettes in different fabrics and colours and styled in very different ways. One model wore the pants as a sort of dress, which Karimi says was meant to be a nod to children putting on clothes however they want to, as opposed to how it’s supposedly meant to be worn.

Tapping into the inner child was another important aspect of Karimi’s message on overconsumption. To the designer, being in a childlike state means being more mindful, more present, and focusing more on play and less on the urge to consume, consume, consume.

To highlight this theme, Karimi played a montage of two models singing and playing piano underneath a sheer piece of fabric.

“I wanted [the models] in a video together where they’re kind of under a tent… like how kids go under a blanket and play,” he explains. “The video kind of set the mood of just playing and being. Less doing and more being is nice. Just focus on the present.”

Check out the full collection below: