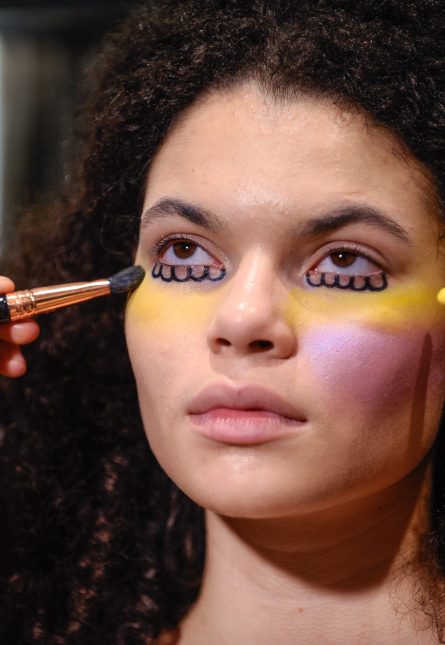 Mani Jassal kicked off the final day of Toronto Fashion Week. Simone Otis of beautyBOUTIQUE by Shoppers Drug Mart drew inspiration for the makeup looks from the designer herself. “During the makeup test, there was me, the model and the photographer and I kept looking at Mani,” says Otis. “She was dressed casually but I loved the colour of her own lips, how she did her mascara and her brows so I said, ‘I think the models should just look like you!'” Otis applied a couple strokes of mascara, a dab of gloss on the lids and filled in brows so a clean, minimalist look. Hairstylist Saira Remtulla created natural waves and loose curls. Melissa Forrest, nail artist for Shoppers Drug Mart, delivered a simple, elegant design using gold and black. “Her collection is so detailed and beautiful, I wondered if I could create a nail that can measure up,” she says. “Then I realized I was overthinking it. Sometimes you have to play off the collection itself to create a chic, classic design. I added the Swarovski appliqué for an extra something something.”

For the next show, Pedram Karimi, Otis created a whimsical design for the runway. “Pedram always talks about environmentalism, about people trying to make the world a better place and about love, so we started to play around with hearts,” says Otis. Big and small heart shapes decorate the models’ faces. For hair, Remtulla created a look to tie the collection together. “We wanted tight coils in the hair but not super tight,” she says, “so there’s frizz but it’s not messy.”

For Andrew Coimbra x Uncuffed, Otis played on the red theme from the collection. “Andrew Coimbra has some shiny red pieces that have a liquid feel, while the Uncuffed accessories are edgy, feminine but tough,” says Otis. She used an eye primer and red liquid lipstick on eyelids, plus a touch of gloss on the eyes right before the models stepped out on the catwalk. A sheer balm with a purple-pink tint was applied to the lips. “Adding a bit of colour to the lip softens the look and makes it a bit friendlier,” adds Otis. Slick, wet-style hair with a sleek middle part complimented the modern beauty look, with Remtulla using gel, water and hairspray to get the look.

The Hayley Elsaesser show is always cheeky and fun—and this season was no exception. Otis created three different makeup looks for the show, all inspired by a galaxy theme and a cosmic, alien vibe. “We did a prismatic, ultraviolet look on the skin by applying a primer, then dusting a few colours on top,” says Otis. “A second look adds drawn-on petal lashes on the lower eyelid. The final look has the prismatic colours but pulls them into a circle shape around the eyes and lips.” The overall effect was otherworldly. Hairstyles played into the same intergalactic theme. Remtulla wet the hair down with gel, then spritzed on hairspray to make the hair tacky before gently applying silver leaf foils. For nails, Forrest created a modern design. “Hayley didn’t want the traditional galaxy nail that we’ve been seeing all year,” says Forrest. The designer wanted to work with negative space—still a big trend in manicures—so Forrest used clear nails and covered them with small stars to give the illusion that they were cascading from the sky. “These nails are gender neutral, so the guys will be having enhancements as well.”

The S.P. Badu show gave Otis another opportunity to create a classic beauty look. “This collection is minimalist and architectural so any kind of trick with the makeup wouldn’t fit,” says Otis. To keep it clean, she applied a wash of foundation, used a contour powder to accentuate cheekbones and amped up brows slightly. The hair was equally simple, with male models wearing their hair as is and the women rocking a sleek braid starting at the nape of the neck.

For the final show of Toronto Fashion Week, Fashion Heals—presented in support of Sick Kids—Otis put a twist on a classic makeup look. “We wanted to do something that was going to be flattering on everybody,” says Otis. “In the past that look would be a dusty rose lip and a pink cheek—but that doesn’t feel new, so we warmed up the skin with shades of orange.” She applied a rust-toned lip crayon to lips and buffed a terracotta shade onto lids. “I think it looks modern and everyone looks great in those tones.”