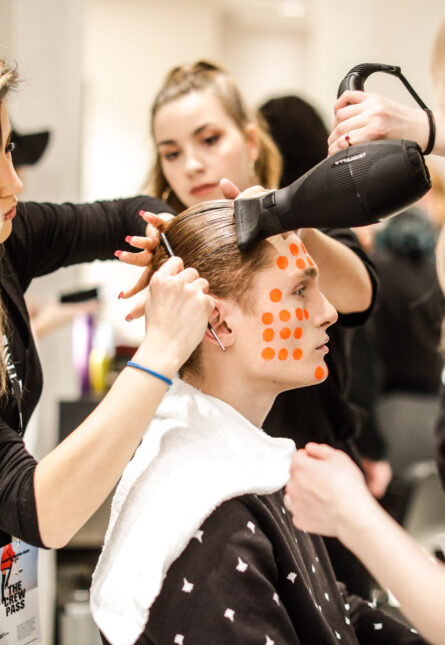 Toronto Fashion Week’s backstage beauty teams kicked off Day 2 with soft, natural looks for House of Nonie.  For the makeup, Simone Otis of beautyBOUTIQUE by Shoppers Drug Mart created another “no-makeup” makeup look, using a brow pencil to accentuate natural brows. “We created an amped up brow, but it’s still very true to life. A look like—a model with such a clean face—is a strong accessory in and of itself,” says Otis. Otis warmed up skin with foundation and a soft contour. For hair, Eve Lespouridis, principal stylist at Victoria Radford, created straight strands with a Nirvana, grunge-like texture facilitated by hair paste and hair oil.

Next up was Tara Rivas, which turned up the heat on the runway. “Her collection has a red hot theme,” says Otis. “This look is all about that oil-slick, prismatic and ultra-violet eye. It has an interesting quality when the light hits. It’s more alive.” Otis used myriad eye colours such as green, pink and baby blue to get a shimmery and holographic effect. She finished off the face with black mascara and a vibrant cherry red lip. To get the slick-hair look, strands were combed into a deep side part, gathered into a low ponytail and set with hairspray. Melissa Forrest, nail artist for Shoppers Drug Mart, created a look for the show that fit right into the theme. All models rocked matte red tips except for one girl, whose nude nails were accented with letters to spell the words “red hot.”

At Hilary MacMillan, Otis created a pretty, wearable makeup look that consisted of healthy, dewy skin with a pop of gold on the inner corner of model’s eyes. Bronzer was buffed onto the high points of the face and a cream highlighter was applied to the tops of cheekbones to make skin stand out on the runway. For the hair, Lespouridis combed the models’ strands into a deep side part and tucked it behind the ears. Wave spray and hair paste gave locks a natural, beachy texture. To tie the manicures into the beauty looks, Forrest created holographic nail art, which is a cool take on the prismatic trend we’ve been seeing on the runways this season.

“This makeup just makes you feel happy,” says Otis about the WRKDEPT show. Faces were left bare except for a pattern of neon green, pink and orange circles placed in a grid across models’ faces. “We tried a bunch of different looks using the circles but landed on this one because the bright colours bring the silly factor up, which disarms the grid.” To top off the look, Otis applied candy sprinkles to lips. Models wore pin-straight, flat-ironed hair that was either parted in the middle or on the side. Forrest was given a specific direction when it came to the nails. “The designers wanted a mix of pink, orange and green shades on super long nails.”

Wil Studios was the second last show of the night and the beauty look had a futuristic twist to it. “These guys are so charming,” says Otis. “It’s menswear and it’s a bit street and they were so open to doing a look. They wanted to do something with glitter, and I wanted to do something with a grittier vibe to it.” Otis applied a lavender foil eyeshadow to the tops of models cheekbones to make them pop, but made the texture slightly chunkier instead of subtle sparkle. For hair, piece-y texture was the mandate. “The look is bedhead texture that looks like they came fresh off a skateboard,” says Lespouridis.

The finale of the evening, Hendrixroe, had both male and female models and a simple, yet retro beauty look. “The makeup has a ’70s rock glamorous vibe,” says Otis. “I wanted to do a chvron shaped eyeliner look instead of a more traditional cat eye flick. This liner follows the shape of the models’ eye but it’s heavier in the outer corner.” Liquid eye liner and a powder eyeshadow were used to get the look. Lips were then coated in a peachy pink nude to bring it all together. For the show, one model had a standout look, with a Ziggy Stardust-style lightening bolt painted onto his face in rose gold and burgundy hues. Hair was combed into a sleek side part with some hair paste applied to strands to give some natural texture.