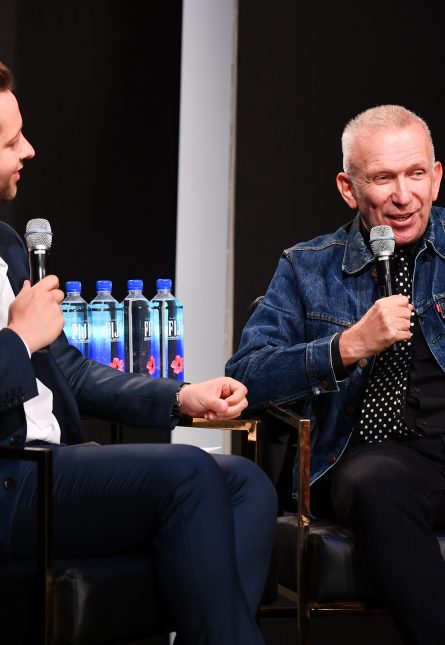 The city’s fashion set packed the tent today for the debut of our Reimagined Toronto Fashion Week. We kicked things off in style with our international guest of honour Jean Paul Gaultier In Conversation with special guest host Derek Blasberg. Mr. Gaultier is an internationally celebrated fashion designer, known for his gender-bending designs, which have influenced and inspired for over 40 years. Among his many accomplishments, the French haute couture designer created the costumes for Madonna’s iconic Blond Ambition tour. Mr. Blasberg is a fashion writer, Vanity Fair’s “Our Man on The Street” and host of “CNN Style” on CNN International. In the tent at Yorkville Village, in front of a rapt audience, our two esteemed guests had a lively discussion with Mr. Gaultier sharing everything from his humble beginnings to working closely with the Material Girl.

ON HIS FIRST COUTURE CLIENT

“My first cone bra was for my teddy bear, when I was five or six years old. I wanted a doll, but my parents wouldn’t let me have one. I made a bra in paper and dressed her. I started with nothing, not even going to school— but if you want to do something well, be honest. I always wanted to be free.”

“TV has helped in some way, like [Keeping up with the] Kardashians, or RuPaul’s Drag Race. It has changed what it means to be masculine or feminine. Clothes are social—you can say a lot of things with clothes. To say that fashion is frivolous is only to see a little part of it.”

ON WORKING WITH MADONNA

“I thought she was fabulous! The second time I met her, she was wearing a corset—I was one of the first to arrive, and she was there—ready and beautiful. She was wearing one of my corset dresses. I felt like I was seeing masculinity and femininity at the same time. She was super sweet, beautiful, I loved her a lot.”

ON HIS FAVOURITE DESIGNERS