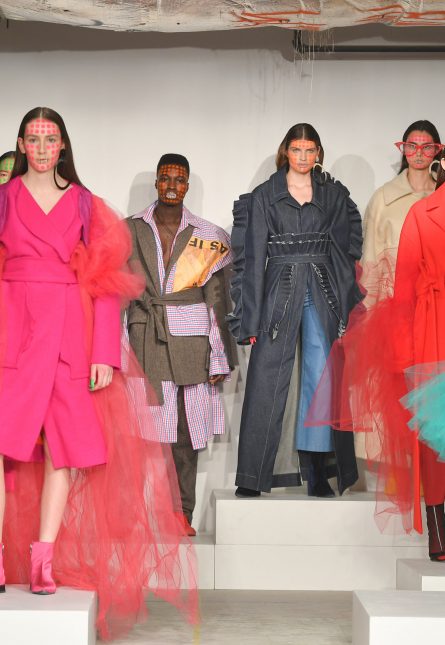 Q&A with WRKDEPT on Day 2 of Toronto Fashion Week

WRKDEPT designers Andy Long Hoang and Tinashe Musara upped the party vibes at Yorkville Village with a bold, bright and over-the-top Fall/Winter 2018 show for Day 2 of Toronto Fashion Week. The collection combined voluminous tulle, ruffled denim and posh wool overcoats for a youthful mash-up of high and low that had the millennial fashion crowd snapping. We caught up with Musara and Hoang backstage to talk inspiration, attitude and killer qweens.

Congratulations on an amazing show! What was the inspiration behind the collection?

“The theme was qweens, with a W, so it’s inspired by drag queen culture, Leigh Bowery and the ’80s London underground scene. We designed the collection while we were in London for Fashion Week, so we also incorporated royal aspects of British culture to kind of bring two worlds together. The whole idea is like a bunch of girls going to a fabulous party and more is more!”

Can you talk about how you blended the royal aspects and the drag queen elements together?

“We wanted to adorn streetwear with royalness so we made this Louis the XIV-inspired denim piece with lots of ruffles. We also did a lot of big tulle shoulders to give it an Elizabethan feel. And if you look at the coats, all the lapels have cutouts of royal faces like Queen Elizabeth — so just being literal about it. And then the party-party side is all the technicolour and crazy pompoms!”

Speaking of party vibes, the music was so fun — what was the attitude you were trying to convey about the collection?

“It was all about celebrating sexual freedom and sex positivity, so we opened with a poem by Maya Angelou, describing her womanhood and how her vagina is a sacred place. It’s very sexual but in a beautiful way — it’s a beautiful poem. And then we go into all these power girls and power song, and then we had RuPaul’s “bring it to the runway.” So everything was about empowerment, not only for women, but for sex positivity, like live out loud, live out proud, and just have fun with it. I think there’s a little thickness in the air about sex right now and we just wanted to make it fun and find that playful, innocent part of it again.”