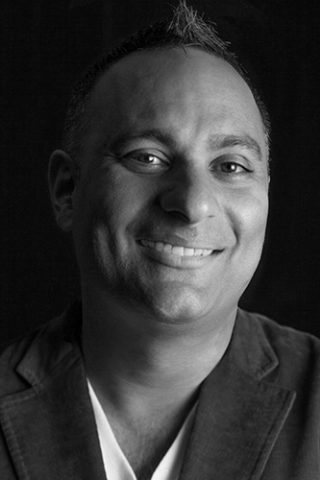 Russell Peters is a Canadian comedy star who’s featured in Rolling Stone’s definitive list of the 50 Best Comics of All Time. Peters started his career in stand-up at the age of 19 at open mic nights in Toronto, and spent the next 15 years honing his craft at clubs across Canada and the U.K. In 2004, he gained critical and global recognition for his CTV “Comedy Now” special, which landed on YouTube and led to larger shows across Canada (he is the first comedian to sell-out Toronto’s Air Canada Centre), the U.S., Australia, South Africa, the Middle East, Asia and the U.K. Since then, Peters has released five stand-up specials on Showtime, Comedy Central and Netflix: Outsourced(2006); Red, White and Brown (2008); The Green Card Tour Live from the O2 Arena (2010); Notorious (2013); Russell Peters vs. The World (2013); and Almost Famous(2016). Peters has appeared in CBS hit show Life in Pieces, as well as films including The Clapper (2017), Public Schooled (2017), Supercon (2017), Ripped (2017), The Jungle Book (2016), Breakaway (2012), Source Code (2011) and Girl In Progress (2011). He has also lent his voice to Family Guy, Bojack Horseman, Bob’s Burgers andRibbit. He has appeared on The Tonight Show with Jay Leno, Late Night With Jimmy Fallon, Jimmy Kimmel Live, Lopez Tonight, The Late Late Show With Craig Ferguson,The Queen Latifah Show and Def Comedy Jam. In June 2017, he began a tour of clubs across the U.S. Peters is currently filming and starring in his first series, The Indian Detective for CTV/Bell Media and Netflix, which airs this fall.