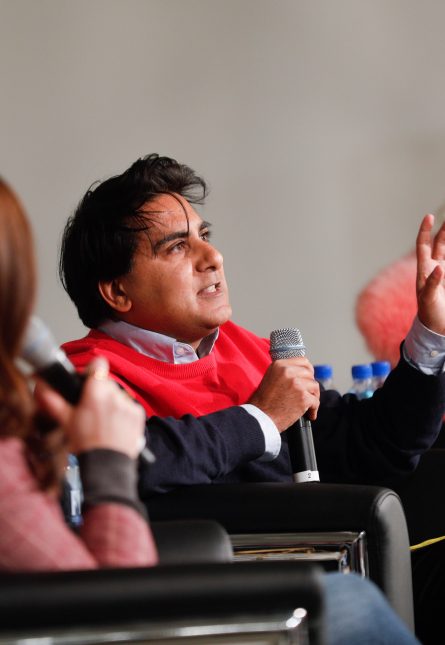 On Day 2 of Toronto Fashion Week, host Donna Bishop joined journalist Shinan Govani and designer Bojana Sentaler for Fashion Talks, a live podcast event presented in association with CAFA. The trio gathered to discuss how the British Royal Family influences fashion. “You can think of the Royal Family as the original reality show,” Govani says. “They were the first influencers.” And that influence goes back for more than a century. It was Queen Victoria who first started the trend of wearing black at funerals. She famously donned dark hues for 40 years after the death of her husband. “She also popularized the white wedding dress,” Govani says. “Wearing white was an iconoclast thing to do.”

The fashion influence of the late Diana Princess of Wales is still being felt on runways all over the world. She popularized the distinctive Sloane Ranger style—the idea of younger people wearing traditionally stuffy clothing such as houndstooth, oversized linen blazers and matronly printed dresses. “Marc Jacobs riffed on that style, so did Miuccia Prada,” Govani adds.

But perhaps no Toronto-based designer knows about the tastes of the Royals better than Bojana Sentaler. Her eponymous label has been worn by both Kate Middleton and Meghan Markle. “I found out on Twitter that Kate Middleton had chosen to wear one of our wrap coats with our signature sleeves for her tour of the Yukon,” Sentaler says. “The coat immediately sold out, and was on back order four times. The Kate Middleton effect is real.” Meghan Markle also donned a tanned wrap coat over Christmas. “She’s been a fan of the brand for many years. She’s so lovely. She had access to wear anything she wanted—and I’m so honoured she chose to wear Sentaler.”

Tickets for tomorrow’s Fashion Talk are still on sale here.