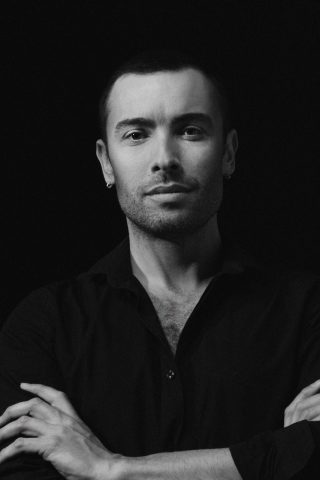 Lucian Matis is a Toronto-based womenswear designer whose eponymous label features elegant daywear and eveningwear with couture-quality embellishment. Born in Romania, he perfected these intricate hand-sewing techniques working alongside his mother in her tailor shop. Matis studied fine arts in Europe before immigrating to Canada in 2007, where he attended Ryerson’s fashion design program in Toronto. Since the launch of his first collection in 2007, his designs have been featured in national and international publications, including FASHION and WWD, and worn by celebrities and VIPs like Nelly Furtado, Iman and Sophie Grégoire Trudeau. Among his many industry accolades, Matis has been nominated twice for the CAFAs Womenswear Designer of the Year award. Lucian Matis is carried at specialty boutiques across Canada, and in select stores in the United States, Mexico, Puerto Rico, and the Middle East, as well as online at lucianmatis-onlinestore.com.