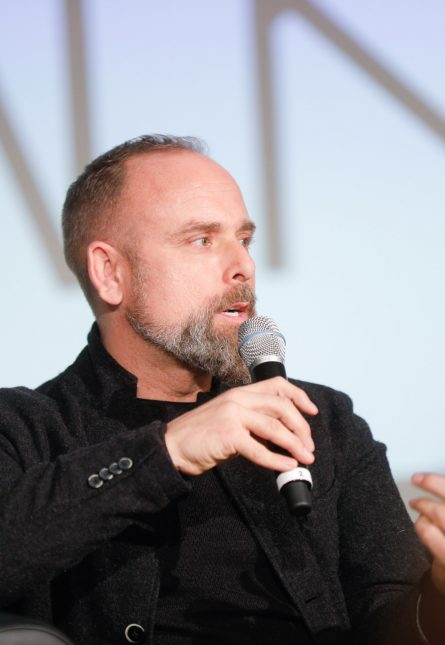 Costume designer Luis Sequeira and assistant costume designer Ann Steel joined host Donna Bishop for the final taping of the Fashion Talks podcast. The trio met in the studio space at Toronto Fashion Week to discuss Sequeira and Steel’s Oscar-nominated work on Guillermo Del Toro’s film The Shape of Water, which is set in the early 1960s.

“Preparing for the film was a long process,” Sequeira says. “We looked at catalogue references, watched movies from the era and compiled four binders of photo research for what working class people, astronauts and scientists wore in those days.” They also traveled to New York to do textile research. “We had bags and bags of wools, cottons and silks, and when we came back we put it in a design studio library. We had thousands of swatches,” Steel says.

Part of the job involved a transformation of the costumes. “What people don’t know is that we built everything for the lead characters — hats, shirts, jewelry, slips and belts,” he explains. “Everything looked brand new. But we wanted to make sure the clothes looked like they had lived a life.” The crew sand-washed lab coats and cleaning uniforms to break down the textiles and make them more convincing on film.

For the movie’s final sequence, which was shot over three weeks in pouring rain, Sequeira and Steele produced multiples of each costume and built waterproof linings to help protect the actors. “We would stay on set until 2 or 3 a.m., holding umbrellas and trying to keep the actors warm,” Sequeira says with a laugh. “We had buckets of hot water for their feet!”

Their hard work and dedication to the film has clearly paid off — Sequeira was nominated for an Academy Award for Best Costume Design. “I took a picture of Luis with Meryl Streep at the Oscars luncheon on Monday,” Steele says. “That was pretty cool.”